NI’s biggest transport provider Translink has continued its effort to tackle plastic waste and climate change with the introduction of a specially designed recycling bin at its Lanyon Place Train Station in Belfast. Launched in partnership with environmental charity Keep Northern Ireland Beautiful and the Department of Agriculture, Environment and Rural Affairs, the ‘Single-Use Plastic Bottle Bin’ will both remove plastic bottles from the general waste stream and grow awareness for Translink commuters on the threat of plastic pollution.

Linking into Translink’s Climate Positive Strategy, the 6ft tall, purpose-made receptacle has been created by local metal artist Peter Lorimer to resemble the appearance of a soft drink bottle. The visual nature of the design and the educational information it displays will serve as a reminder of the scale of the plastic problem in Northern Ireland and a nudge to the public to recycle plastic waste or refuse it at source.

The initiative builds on the success of a separate single use plastics bottle bin that Translink installed at its North West Transport Hub in Derry-Londonderry. In operation for over 12 months now, positive passenger engagement with the bin has resulted in the removal of over 40,000 plastic bottles from waste generated at the station.

“Translink recognises that it has a significant role to play in leading the transformation of public transport in NI. Translink’s commitments through the Better. Connected Strategy and our Climate Positive Strategy is creating a path for a healthier, greener and more sustainable future for generations to come. We are driving out waste and protecting and enhancing our natural heritage by reducing waste through employee and customer awareness, and through robust waste segregation, reducing the over-extraction of finite natural resources. This initiative at Lanyon Place will equip us to take another step forward in Translink’s journey to zero-waste and further improve awareness amongst our staff, customers and the public on the need to reduce the use of single-use plastics.”

“DAERA is delighted to fund this initiative in conjunction with Keep Northern Ireland Beautiful. Initiatives like these bins will really make a difference to protect our natural environment. Of course, we would like to see the use of more reusable bottles and a reduction in the amount of single use plastic being purchased where possible, but this initiative by Keep NI Beautiful and Translink will help reduce the amount of litter on our streets and in turn prevent plastic from entering our seas.”

In helping to set up the initiative, Keep Northern Ireland Beautiful aims to highlight the persistent, council-wide problem with plastic pollution that has been particularly widely reported in Belfast in recent months. The charity will soon publish their annual Cleaner Neighbourhood Report 2021/22, which indicates that 50% of 554 areas surveyed across the country contained some form of drinks-related litter present. Their Litter Composition Report and the Litter Composition Producers Report will follow next year and take a deeper dive into the plastics issue.

“These ad-hoc bins are a transparent, living and inescapable monument to the mountain of plastics that we continue to create at all times. They provide another space to manage the plastic waste that passes through a particularly busy station, but much more importantly, they remind us that plastic problem is still very much with us as an issue and that we need to abandon our single-use culture.”

The ‘Single-Use Plastic Bottle Bin’ has been installed through Keep Northern Ireland Beautiful’s ‘Tacking Plastic Northern Ireland’ programme, which is funded by the Department of Agriculture, Environment and Rural Affairs. The programme encourages the public, councils, schools and businesses to avoid buying single-use plastic and to make a commitment to reduce pointless plastic by signing a ‘Plastic Promise’. Visit www.liveherelovehere.org/plasticpromise to find out more. 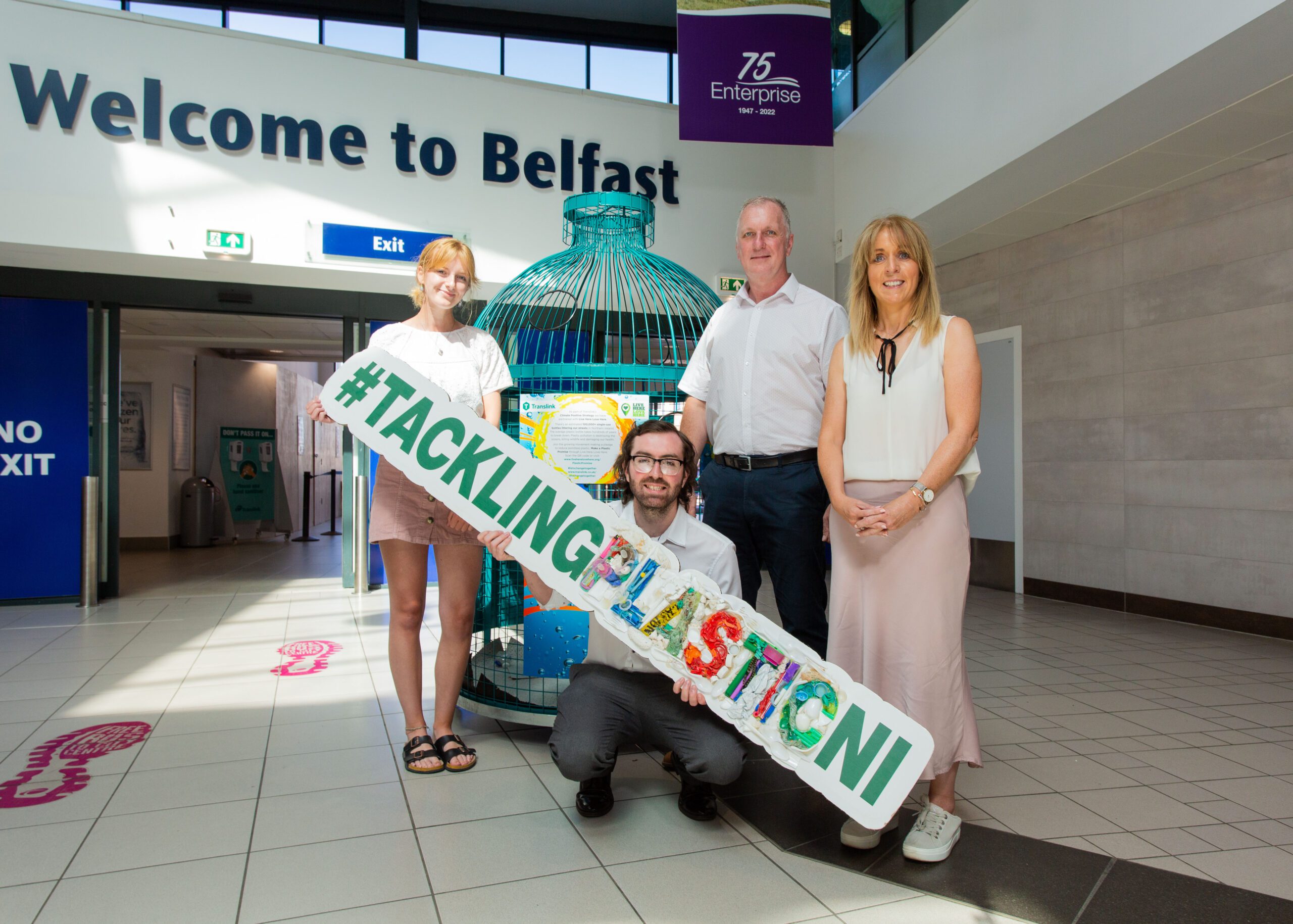 « Tender – Urban Green Space consultations and research
Back To School, Reduce Your Plastic »